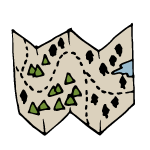 Banerigg House is situated on the A591 just south of Grasmere village and directly overlooking the lake.

By car from the north… Head south on the A591, ignoring all signs into Grasmere village!   As you pass the Daffodil Hotel on your right, Grasmere lake will then appear on your right, Slow down as the house is directly after a sharp bend on the left, directly opposite the lake.

By car from the south… Head north on the A591 from Ambleside, passing Rydal Water on your left. After a series of bends through woodland you will see Grasmere lake on your left, slow down Banerigg is on the right directly overlooking the lake.

By train… Take the train to Oxenholme on the mainline and then the small shuttle train to Windermere Station. From there take a 555 bus from directly outside the railway station to The Daffodil Hotel Grasmere or take a taxi (local taxi 015394 35506)